On adopting a dog in Japan

Things have been pretty hectic this fall. In fact, although I feel that I have been composing many posts in my head recently, it has been many many months since I have been able to update my blog.

One of the many things that I have been dedicating my time to lately is our new dog. It has been 2 months today since he arrived in our lives. For years I have been craving a cannine companion, and have been particularly attracted to Japanese breeds like Shibas and Akitas. I found it fascinating that these breeds are genetically very close to wolves and considered some of the oldest breeds in the world. Perhaps this accounts for their notoriously tricky personalities (extremely loyal to their owners but not easily socialized to accept strangers or other dogs). Yet I find their smart, independent and athletic aspects still make them awesome dogs. With this in mind, after convincing my dear husband (that process took less than two years!) that we could be happy with a dog, the next task was to find a suitable rescue dog.

Now this may not be as difficult for someone who can fluently surf the internet in Japanese, but with my only semi-literate skills, my searches seemed to turn up very little in the way of local animal shelters. One of my first inquiries had been with the local police- what was the fate of stray animals in our own city (Musashino, in West Tokyo)? From what I could gather, strays were held by the city for up to two weeks whereupon if they were not claimed by their owners, they were euthanized. I maybe misunderstood but apparently there was no system in place in our city to re-home unwanted pets. Further research revealed that the Tokyo municipality had two shelters– one in Hino, and one in Suginami, but with open hours only twice a month and very little online information, it was not encouraging.

One day, whilst visiting a local vet with one of my cats, I mentioned that I was interested in adopting a dog. The vet said she knew someone who volunteered at a local shelter, and when  I went back a week later, I got a pamphlet. I contacted them right away and marked my calendar for their next open day. On September 8th, we walked down the stairs to the crowded basement room and opened the double-padded soundproof door to the shelter, located just west of Shinjuku in Nakano. It was very loud, and the smell could be pretty overpowering for someone not used to dogs, but it was a dream come true for me. There were many dogs, some of whom we had seen pictures of on their excellent website.  My eye was instantly caught by a pair of stunning pure white dogs in the corner, but I forced myself to take the time to go around and meet all of the dogs, asking the staff some of their stories. 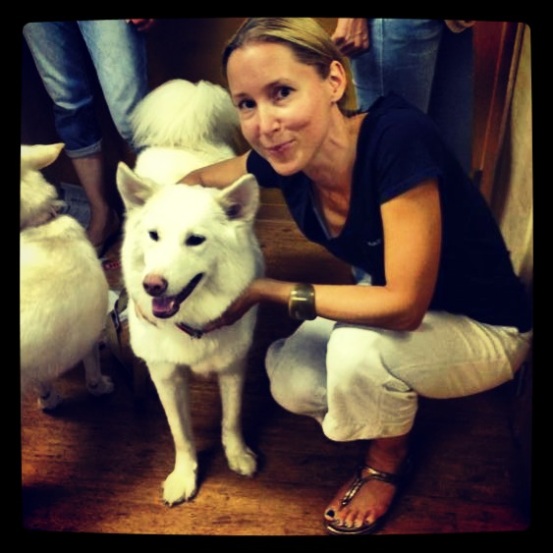 Meeting Ibuki at the shelter

Coming back to the white dogs, I learned that they were 2-yr.old brother and sister, from a litter of 5 born to a dog rescued shortly after the March 11th, 2011 disaster in Fukushima. The male, with his gorgeous semi-long fur and winning personality instantly stole our hearts. We filled out an application for his adoption on the spot. His background story made this encounter all the more poignant for me.

His name ‘Ibuki’ could mean various things in Japanese, including breath and origin of life…a fitting name for a creature so beautiful and blessed to have come from an area so struck by disaster… He was very lovingly raised from birth (along with his other siblings) by a foster family in Saitama. I was very impressed to see that the shelter had so many dedicated volunteers and supporters and a system of foster families so that the animals can be loved and well socialized until they find their forever homes.

It is hard to express just how lucky I feel to have made this encounter with this creature at this time. He brings me joy every day and I know for the years to come I will cherish the day it all began, in that small basement room in Nakano.

Ibuki, settling into his new home

Beautiful Ibuki- his adoption picture from the shelter’s website

For those interested in adopting a pet, I highly recommend the shelter where we found Ibuki. The staff are excellent and were able to communicate by email with us in fluent English. The shelter was started in 2007 by Ryoko Tomomori- she had paid off all the overhead costs of her pet salon and wanted to do something more for the cause of animals. Japan obviously has less awareness of the negative issues associated with pet shops and the sales of puppies than in the US, but NPO’s such as Ryoko’s are doing a lot to remedy this. Interested parties are also encouraged to join as volunteers- foster families, dog walkers and those who can help by driving pets are always welcome.

Fortunate to have called Japan home from 1998-2014. Active in Sogetsu-ryu Ikebana, and with years of experience in tea ceremony, Japanese dance and ceramics, inspired by Japan's unique mix of heritage and innovation. I've created Nihonbi as a place to share my experiences in the Japanese art world and to network with others with a similar passion.
View all posts by nihonbi →
This entry was posted in LIfe in Japan and tagged animal adoption in japan, animal rights, animal shelter, japanese dogs, musashino, nakano, pet adoption, pet shelter, tokyo animal shelter. Bookmark the permalink.

11 Responses to On adopting a dog in Japan